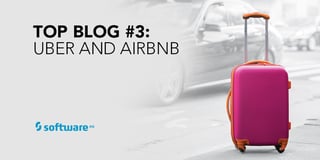 Toward the end of last year, I wrote a blog about how the ubiquitous Uber and Airbnb may not be the best representatives of digital disruption.

A lot has changed since then, making me more convinced that they are not good examples. For a start, they forgot to concentrate on the customers.

First, Uber’s application for a new license in London was rejected by Transport for London (and now by Sheffield and York), which said Uber is not a “fit and proper” private car hire operator.  By ignoring local regulations, it had failed to protect users.

And, just this week, an EU court ruled that Uber was a transport company and thus subject to stricter regulations.

And Airbnb has been under fire for hosting fake landlords, leaving customers vulnerable to scams and placing them in potentially dangerous situations.

Both are apps that make an existing business model scale better; but is that really the future for the digital economy? You tell me.

Meanwhile, click below to read my blog from last year which ranked #3 out of our top ten blogs of the past 12 months.

Here are the top ten blogs on B2B.com for the past 12 months: