Still Running, After all These Years… 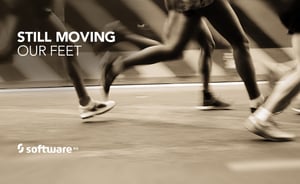 On June 7th, our CEO Karl-Heinz Streibich grabbed the chance to take part in his last JP Morgan Corporate Challenge as the CEO of Software AG. Arnd Zinnhardt, our CFO, also presented his great running skills.

As part of our Move Your Feet Campaign, which celebrated its 10th anniversary last year, around 60 Software AG employees took on the 5,6km (3.5 miles) challenge through downtown Frankfurt.

They passed the old “Opera House,” the 21-meter high “Hammering Man” sculpture (by the American artist Jonathan Borofsky) and more.

The final leg ended at Grüneburg Park, where the focus was now on food and drink. It was all about celebrating the global corporate team spirit rather than discussing who arrived first at the finishing line. The pictures of the party afterwards speak for themselves.

The JP Morgan Corporate Challenge started on the night of July 13th, 1977 in Central Park, with a total of 200 runners from 50 companies has now grown to include 13 races in seven countries on five continents - Boston, Buffalo, Chicago, Frankfurt, Johannesburg, London, NYC, Rochester, San Francisco, Shanghai, Singapore, Sydney and Syracuse.

The actual idea behind the race was that people from various banks in New York wanted to find a way to create an event solely for corporate runners - offering a distance which even busy executives could master.

Our members of the board and many other employees showed that they can indeed master this program in the midst of their busy schedules. In these past 10 years we were able to chalk up a staggering  81.575 km in total, equivalent to 300,000 euros that were passed on to various charitable organizations. 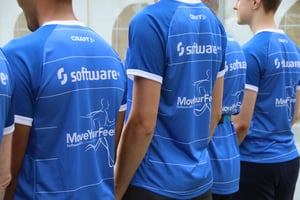 So, keep those feet running! A bit of sport combined with a lot of passion can influence many people’s lives in need. Interested to find out more about moving your feet for Software AG? Then visit our new career page below.