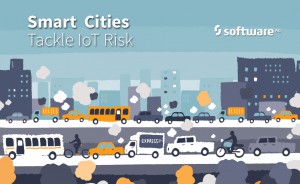 As cities get smarter with the Internet of Things (IoT), municipal governments will have to enact new regulation to ensure adequate risk management.

Smart cities are going to be the lynchpin for IoT-sensored devices such as cars and roads, and will provide much of the framework for connecting smart city Things to the Internet where they can be managed.

As Dr. John Bates says in his book Thingalytics: Smart Big Data Analytics for the Internet of Things: “We’ve all heard about innovations like self-driving cars, which are now a reality. Consider the next step: In the future all cars will communicate with one another, as well as with smart roads and smart cities, to coordinate and optimize journey times —and avoid collisions.”

There are already some smart city pilots going on, according to an article in IoT Evolution. In Chicago, for example, there is a smart intersection where sensors monitor vehicles and pedestrians, adjusting traffic signals to minimize waiting times. And a smart police car is connected wirelessly to the public safety data network, enabling the police to exchange information in real time.

As smart cities grow, however, there is added risk. Interconnected systems can fail at any given point, and weak links can introduce the possibility of infiltration or interference.

According to Newrisk: “Catastrophic failures occur because highly connected systems can suddenly fail from a critical point coming under pressure or from convergence of operations which create a new central point of weakness or a vulnerable target for malevolent action against the company or government operation.”

Terrorism is an extreme example of this; it is not only possible but is a real concern. The Stuxnet computer worm is one example, attacking Iran’s nuclear program through vulnerabilities in computer software.

Imagine if terrorists, bent on disrupting a financial center, hack into the city’s network and re-program smart traffic lights so that they cause accidents and severe gridlock. At the same time, they turn off electrical power in the buildings housing exchanges and banks. Who is to blame for the financial repercussions – the loss of trading revenues, missed work, endangered files – of such an act?

Would it be the city? Its network brought together all of the connected systems. Would it be the traffic light manufacturer, whose system may have been the vulnerable “gateway” for hackers? Or, would the connected buildings be responsible for their tenants’ losses? After all, the buildings were also willingly connected to the smart city network.

In short, smart cities will have more visibility and more control over their environment —but this also means they will have more responsibility for it. Along with more risk and perhaps more legal liability. Smart cities should hire smart risk managers and lawyers to draft specific new laws. Because “It wasn’t my fault” is not a valid defence.